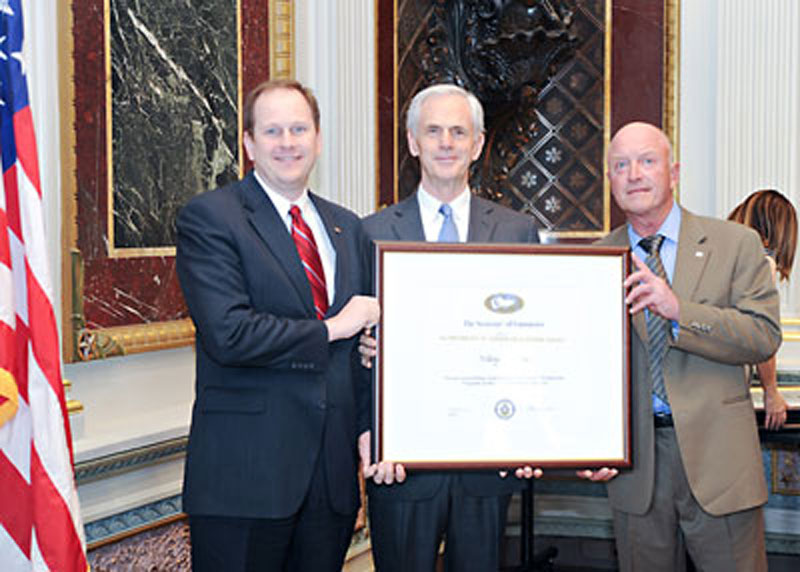 Viking Spas, Inc., maker of the Viking and Destiny River hot tub brands, was presented with the President’s prestigious “E” Award by U.S. Commerce Secretary John Bryson. Viking Spas CEO/President Tom Veneklase & Director of Sales & Marketing Tom Kneeshaw received the award on behalf of the company at a ceremony which took place at the White House in Washington, D.C.

First established in 1961, the President’s “E” Awards are the highest recognition any U.S. entity may receive for making a significant contribution to the expansion of U.S. exports.

“We are very humbled by winning the award and my congratulations goes out to all the employees of Viking Spas and a deep gratitude to our customers who support our efforts in building our product” said Tom Veneklase President/CEO of Viking.

What the Presidential Export Award Means

“I am pleased to recognize Viking Spas for receiving the President’s “E” Award, which honors companies that make significant contributions toward increasing U.S. exports,” said U.S. Commerce Secretary John Bryson. “This Administration is committed to leveling the playing field for American businesses and workers to help U.S. companies build things here and sell them around the world. “E” Awards winners like Viking Spas have excelled in this effort, demonstrating four years of successive export growth. It is companies like this that are helping to grow our economy and put more Americans back to work.”

U.S. companies are nominated for the “E” Awards through the U.S. Commercial Service office network in 108 U.S. cities and more than 75 countries which helps U.S. companies export. “E” Awards are awarded to applicants that can demonstrate a significant contribution to U.S. export expansion that is measurable, innovative, sustainable, and has broad impact.

Viking Spas is headquartered in West Michigan but our hot tubs our available all across North America. Locate a dealer near you and shop our spa collections today. Find out how a hot tub from Viking Spas can improve your life!

This website uses cookies to improve your experience while you navigate through the website. Out of these, the cookies that are categorized as necessary are stored on your browser as they are essential for the working of basic functionalities of the website. We also use third-party cookies that help us analyze and understand how you use this website. These cookies will be stored in your browser only with your consent. You also have the option to opt-out of these cookies. But opting out of some of these cookies may affect your browsing experience.
Necessary Always Enabled
Necessary cookies are absolutely essential for the website to function properly. These cookies ensure basic functionalities and security features of the website, anonymously.
Functional
Functional cookies help to perform certain functionalities like sharing the content of the website on social media platforms, collect feedbacks, and other third-party features.
Performance
Performance cookies are used to understand and analyze the key performance indexes of the website which helps in delivering a better user experience for the visitors.
Analytics
Analytical cookies are used to understand how visitors interact with the website. These cookies help provide information on metrics the number of visitors, bounce rate, traffic source, etc.
Advertisement
Advertisement cookies are used to provide visitors with relevant ads and marketing campaigns. These cookies track visitors across websites and collect information to provide customized ads.
Others
Other uncategorized cookies are those that are being analyzed and have not been classified into a category as yet.
SAVE & ACCEPT
/a/tickets/8080